skip to main | skip to sidebar

"A novel?" I read out loud from the cover of the book I got for Christmas from my sister. "This thing is blasted science fiction!" I've been flipping the book half shut to yell at the cover for the last two hours or so. Ever since he dodged out of his awful, emasculating life into a...I won't say it. I can't ruin the ending! I'll just say a few things to alleviate my exasperation. There was no evidence of this in the first three quarters of the book. I mean, there was one line. One line! And now this! What am I supposed to do except be delightedly furious at this author's craft. He beat me, that's for sure. I did not see this coming. And this whole time I was thinking, "This is awfully womanish to have a male author."

I would say more, but I just can't. This book had me giggling out loud. I got so frustrated, I yelled at it several times. I told the man he was an idiot and a complete loser-face (and I was right). And I still cannot believe what happened. You thought it was bad, and then it just got worse and worse and worse and worse. And then....that's when I started really yelling. And reading as fast as I could, skipping as many details as I could muster. "What?!" Oh man. And then I was giggling out loud again. You gotta read this, Heidi. You just gotta read it.

Apples to Apples is the game. 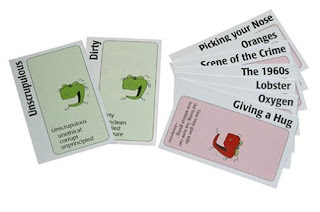 "Corrupt" is the adjective card. "Men" wins that precious green point. Maybe it wouldn't bother me so much if I could just read the card. Maybe it would say, "Men: humankind, homosapiens, the human race." I forget to look at what it says, but it might as well say, "Men: Aren't all males idiots?", because that is the way the card is treated as it comes up during our game. I think, "It is true: every man [and every woman] is corrupt at some time," but that's not what anybody means right now. I feel sad.

Don't get me wrong. It's easy to associate some feministic or anti-feministic emotionally charged political banter and attach it to the words that I am saying, but it would be inaccurate to do so. What I am saying is that when the heart of a woman is displeased with men as a whole, and she throws around that "men" card as the blonde of every joke, the butt of life, she is a catalyst for that very thing. She has contributed to the corruption that she says is outside of women and outside of herself. What's worse, as she calls a heart a spade, she transfers that negative thing into his thoughts, existence, and behaviors.

I want to say something to those girls at my table. You will experience many things, and you will make judgements about those experiences that will become part of what you believe. You will observe everything in your life from the eyes that believe those things. You will compare what you know with what you experience, and you will find what you know in what you see. Many women I encounter have been hurt by men. Some women have only experienced men who have hurt them. Do not listen only to the voices of those women, though their cry may be loud in your ears. See the hate caused by deepset pain that is foaming around their mouths at the outpouring of their words. Now hear another voice. Hear the voice of the only One who makes men and women whole. Let Him make you whole, and believe that He makes others whole. Perhaps you will learn to respect men in the deepest part of your heart. Perhaps as you look at the world around you, you will not see "men" as the noun that best manifests the adjective "corrupt". Perhaps you will not see men and corruption as they contrast women, but mankind as we contrast God. Perhaps you will even perceive the transforming power of God in men and women as their faces are unveiled and they begin to reflect His glory.

My day and my thoughts.