skip to main | skip to sidebar

So in case I haven't mentioned it enough, I've been recently married. Two months today, actually. I know this, because I received an email from TheNest.com, a sequel to TheKnot.com. Their emailing intention was to help me with all of the things with which I must be struggling at two month of marriage. I can browse easy recipes, get tips about battling the post-wedding blues especially the ones related to wedding debt, and even buy The Name Change Kit for $29.95. I admit to you: their help isn't really relevant to me. I don't need their recipes. Our wedding is paid for, and my name is successfully Katie Banley for all major government and financial institutions.
People talk a lot about marriage being a difficult thing. Right now, I feel that there are a lot of hard things going on in my life, but marriage is not really one of them. My marriage is pretty much an escape from all of the hard things.
The most difficult thing between us was uncovered by a recent conversation in the kitchen. Generally, I have been feeling that there is no food in our house. Generally, Thomas has been feeling as though we have too much food in our house. Bread is an example of this. I have been buying bread, English muffins and a loaf of whole wheat bread here and there. Thomas sees this bread and feels pressure to eat it so that we can start fresh and obtain something new. "We have so much bread, so I'd better eat it all up." I don't understand this mentality. Neither do I understand how the bread could be gone every time I turn around. Conversely, Thomas doesn't understand how we could possibly have a continuous supply of the thing he's working so hard to deplete. I'm buying; he's depleting. I'm gathering; he's preparing for the hunt. Our efforts are thwarted by the other.
This is the extent of the difficulty between us so far. I can't discount anyone who says that marriage is difficult, though, because I can see how things outside of a marriage could easily become things between two married people. There are plenty of difficult things outside of us. At some point, they will probably come between us, and we'll have to work hard to resolve them.
Thomas and I get along very well. This is a blessing from God. Many people are married to someone with whom they don't get along. My brother says that marriage is something in your life that God has given to you to manage. For us, God has managed the getting along part already. We just do.
What I am trying to say is that everybody gets their own things to manage. I don't know how he decides, and I don't know that his methods measure up to our idea of fair. I saw a homeless woman asking for money on a busy Baltimore street the other day. I've seen a lot of homeless men on the Baltimore streets, and coming from the Midwest, I am moved every time. But seeing a woman in her thirties on the streets makes me wonder what's really happening. It makes me wonder what I'm doing with all of my time. We all need to be somewhere. We're like hamsters on steroids around here, peddling away on our impersonal wheels. 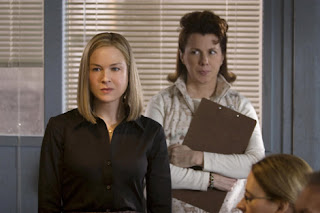 It's the strangest thing for me - feeling like I'm overstepping social norms to introduce myself to my neighbor. Have you seen New in Town? Maybe you should, because then you'd understand that in my heart, I'm just Blanche, the lady with the clipboard who brings over tapioca and asks:
"Have you found Jesus?" -Blanche
"I didn’t know he was missing" -Lucy
at 8:38 AM

Well, that was fun to read. Isn't God Good!!!
But it sounds like Thomas is going to grow around the middle if he keeps up with your bread buying! :-)
Have a fabulous weekend you two!
NP aka MoM

Are you sure I said that? That doesn't sound like me. At least not to me.

Still, fun to read your thoughts :) Thomas's bread compulsions are a little weird. :)

My day and my thoughts.